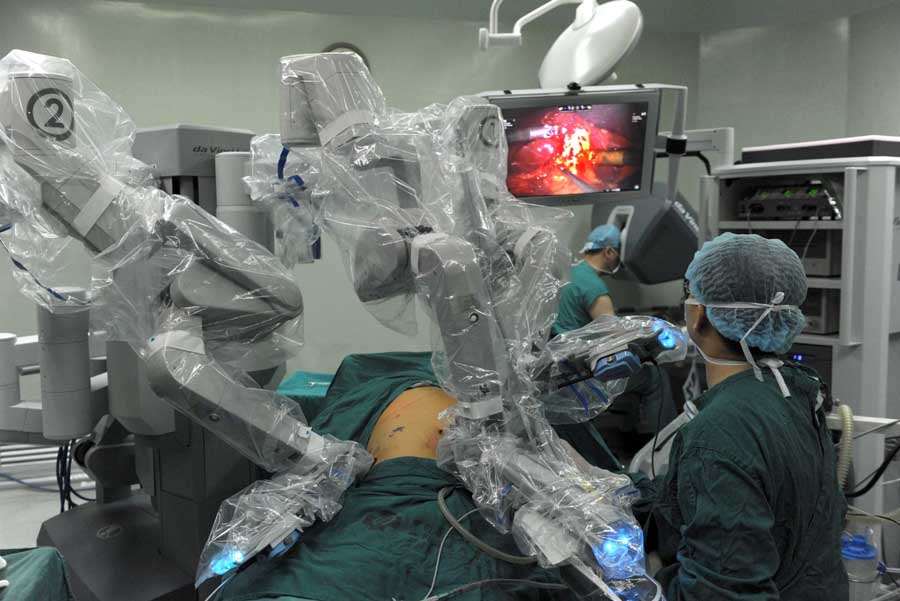 A hospital in Sichuan province uses an imported robotic surgical system to remove a patient’s gallbladder for the first time. Photo provided to China Daily

Since the notion of artificial intelligence became a hot topic around the world, experts started to list the jobs that are most likely to be replaced by robots.

It is no surprise to find that highly repetitive jobs are on the list, but some are beyond imagination to most of us－at the moment.

[PL – You might suspect that factory workers are on the list at number 1, which they are, but check out others on this list that are surprising]:

There is already a robot that can replace part of a lawyer’s job. In 2011, Blackstone Discovery from the United States started to provide a document analysis service to its clients. The artificial intelligence is capable of analyzing 1.5 million documents within several days. The cost of using such AI is less than one tenth of hiring a real lawyer. And lawyers make mistakes, robots don’t.

Associated Press started to use artificial intelligence software to write financial statement reports in July. The software can save 90 percent of writing time so AP can guarantee an immediate release of these reports. AP also uses software to analyze sports rankings and game results.

Robots first carried out surgery in 1993. In 2010, China approved the use of the da Vinci surgical system for operating theatres.

By the end of last year, a total of 3,079 da Vinci robots were operating around the world. China has 28 of them.

On Dec 8, Zhejiang People’s Hospital used the da Vinci robot to remove a tumor from a patient from Mali. The robot has four arms andone endoscope system that can move 360 degrees inside a patient’s body.

The robot was able to remove all of the malignant tissue around the tumor without destroying healthy tissue.

China has already developed a type of robot that can work in fire, water or even after a nuclear explosion. The robot, developed by Shanghai Jiaotong University, is set to be widely used in rescue work.

Siasun Robot & Automation Co in Shenyang, Liaoning province, has developed a nursing machine that can tell jokes, play music, canbe depended on to deliver food to a patient punctually, and will do all that is required if there is an emergency.

In the United States, experts are developing a robot that can replace humans to attend Ebola patients so that humans can avoid beinginfected by the virus.